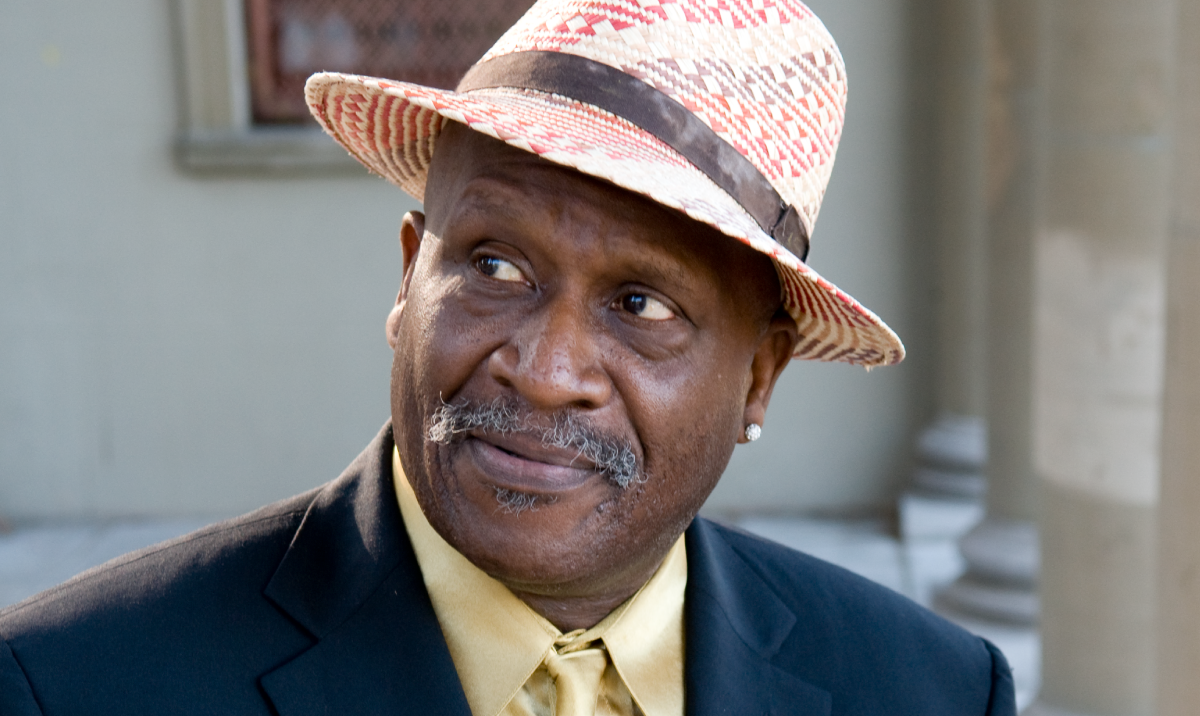 In September 2014, some 50 years after moving to Los Angeles to form the band Rising Sons with fellow blues musician Ry Cooder and Jessie Lee Kincaid, Taj Mahal hightailed it to Nashville to receive an honor he called “one of the most powerful and wonderful things that could ever happen in my life.” Celebrating decades of recording and touring that have nearly singlehandedly reshaped the definition and scope of the blues via the infusion of exotic sounds from the Caribbean, Africa and South Pacific, the two-time Grammy winning singer, songwriter, film composer, guitarist and multi-instrumentalist was feted with the Lifetime Achievement for Performance Award at the 13th Annual Americana Honors and Awards.

“I’ve been performing for over 50 years, and to be recognized for the road I’ve traveled means the world to me, says Mahal, who during the show performed “Statesboro Blues” – which he first recorded on his eponymous 1968 debut album – on dobro with a band that included Cooder and Don Was. “I could not have done this without the audience that has been so supportive of me throughout my musical journey. It was a fantastic night and I was thrilled to be there and celebrated among such other outstanding American musical treasures like Jackson Browne and Flaco Jimenez, whose music and talent I am a fan of. It certainly represented a diversity of musical styles and culture. That’s what I’m talking about essay help!”

The night at the legendary Ryman Auditorium capped another extraordinary year for Mahal, which began with a performance at the Gregg Allman Tribute Concert in Atlanta and included playing on the entire Blind Boys of Alabama Christmas album; performing as part of the Bonnaroo Superjam on a bill featuring Derek Trucks with Chaka Khan, Eric Krasno from Soulive,  renowned R&B/blues session drummer James Gadson, David Hidalgo from Los Lobos and Susan Tedeschi; and playing and recording with Van Morrison in Dublin.

Since the release of 2008’s Maestro, his most recent studio recording which received a Grammy nomination for Best Contemporary Blues Album, Mahal has been busier than ever touring and recording at a whirlwind pace with old friends and fellow musical sojourners. In 2010, after being nominated for Entertainer of the Year by the Blues Foundation, he joined Jimmy Fallon’s Late Night studio band The Roots as a special musical guest on the Rolling Stones classic “Shine a Light.” He also opened in Lake Tahoe for Bob Dylan. One of the highlights of the following year as performing a special opening solo set for Eric Clapton and Wynton Marsalis at Lincoln Center; Mahal also performed several songs with his two fellow legends. The concert was recorded and released as a CD and CD/DVD entitled “Wynton Marsalis & Eric Clapton Play The Blues – Live From Jazz at Lincoln Center.”

After starting 2012 producing and performing (vocals, guitar and banjo) on Vusi Mahlasela’s live album Say Africa, Mahal joined the critically acclaimed Experience Hendrix tour for a three week run that included performances by everyone from Buddy Guy, Dweezil Zappa and Robby Krieger to Robert Randolph, Jonny Lang, Kenny Wayne Shepherd, Keb’ Mo’ and Living Colour. Energized anew after the Sony Legacy release of two collections celebrating the riches and rarities of his musical legacy – the two disc set The Hidden Treasures of Mahal Mahal 1967-1973, featuring a full live 1970 concert from Royal Albert Hall, and The Complete Columbia Albums Collection box set, featuring all of his LPs from 1968-1976 – the bluesman enjoyed a wildly productive 2013.

That spring found Mahal singing and playing harmonica on “Further Down the Road” from Clapton’s Old Sock album, and performing as a featured guest at Clapton’s Crossroads Guitar Festival at MSG (NYC) where over 30 of the world’s greatest guitarists played sidemen to each other over two nights. Mahal jammed with The Allman Brothers Band featuring David Hidalgo and Cesar Rosas of Los Lobos and in a special unplugged acoustic set with Keb’ Mo’.

That June marked the release of the all-star soundtrack album to “Ghost Brothers of Darkland County,” a supernatural blues n’ roots musical featuring music and lyrics by John Mellencamp, a libretto by author Stephen King and production by T-Bone Burnett. Mahal appeared on “Home Again” with Sheryl Crow, Dave Alvin and Phil Alvin, in addition to “Tear This Cabin Down” and “What Kind of Man Am I.” He later performed on “Vicksburg Blues” on actor/recording artist Hugh Laurie’s album Didn’t It Rain and a new rendition of his song “Winding Down” on the Sammy Hagar & Friends recording. He capped the year with “An Evening with Taj Mahal” at the Grammy Museum in Los Angeles.

Mahal’s career has been full of and defined by colorful twists and turns, unexpected whimsical ventures and a commitment to a muse that has long preferred freewheeling innovation to conformity. So there’s always the challenge of finding the right words and phrases to capture just what he’s meant to American music over the past half century. Miles Mellough, who wrote the stark and honest, no holds barred liner notes for The Complete Columbia Albums Collection, captures the complexities perfectly on several posts he penned on his blog Birds with Broken Wings after the box set came out.

“Here’s the thing, plain and simple,” he writes. “Taj Mahal has always been a conundrum; a man who is capable of mirroring many things to many people, and the reason why is because he’s an enigma — an alchemist and a contrarian…Through his music he’s been a dirt farmer, a man of gentry, and a Mississippi riverboat gambler. He’s played the role of the pious country preacher of old South camp meetings to a chain gang prisoner breaking rocks in the hot, midday sun. He’s been a hard-boiled harp player with a gold tooth and process blowing gritty on the South side of Chicago to a West Indies fishing boat captain sipping Banana Daiquiri’s with a St. Kitts woman…Like the blues tree with its many roots, Mahal has become the sum of many parts. But if you were to strip him of the elements that have come to define him publicly, you’d no doubt find that beneath it all he’s really just a simple man with a harp, a steel guitar, and a banjo in his rucksack; a man making music with a whole hell of a lot of heart and soul.”